It's been a while since I've made a post relating to my health and fitness goals. Part of the reason why I've been in the dark about my fitness was because I was consistently training every day and sticking to my diet so well that I didn't really feel the need to provide an update every week or month. Another reason was because, to be honest, I wasn't really satisfied with the results I was getting, which I suspect was a result of having hit a plateau halfway through my bulking program. So I've decided to switch things around a bit and focus more on nurning fat and improving my overall health and fitness instead of just putting on strength and gaining size.

I'm currently six weeks into my fat-shredding program, which I started after I recovered from a bulking program that I did two weeks prior to starting - that, and I was busy recovering from the flu soon after I had finished, and I didn't want to start a new program while I was still feeliing sickly. Since starting, I've lost over 4 kilograms (or 8.8 lbs if you're American, or just plain weird like that), and at least 3.5% body fat. I know, it doesn't sound like a lot in the grand scheme of things, but a small change in weight like that really makes a huge difference after putting on weight during a three-month bulking session.

And to show people that I'm not BSing, here's a little progress shot I've made this morning! 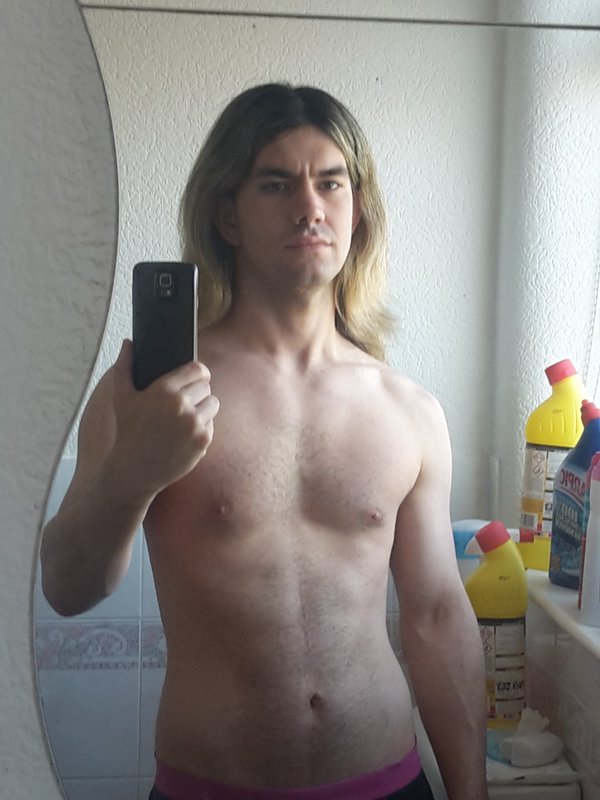 As far as the diet portion of the program is concerned, I've been sticking to a strict low-carb protein-heavy diet. And before anyone asks, no, I am not starving myself thin - I've been consistently maintaining a daily goaf of at least 2,000 calories with a carb/protein/fat ratio of 30/40/30, and that does also include my rest days. I'll admit that I did cheat a few times (like I did last night, THANK YOU DARLING NIECE), but as long as I'm consistently eating right and hitting that goal every day, it doesn't really matter in the long run.

It really is a constant struggle, because the last few times I've tried losing weight it ended up in total failure - either from a cold, or loss of motivation, or too many cheat meals, or when I'm close to finishing I start thinking about the next program that I want to do and it starts to interfere with what my current goals are... which then leads to loss of motivation. I'm glad that I'm doing something right for once, though, because I've started to acknowledge my faults and shortcomings, and now that I'm addressing those, I'm now reaching my goals much more quicker (and more safely) than I did when I first started dieting three years ago.

I still plan to bulk up again at some point, though - since that's always been one of my main goals. I don't know when exactly though, because I'd rather not think about that now in case it distracts me too much again and I start to lose sight of what I'm aiming for at the minute. It could even be a couple of years for all I know - all I know is that I want to start putting on muscle again once I'm satisfied with my fat-loss results, and even then, it needs to be done gradually so that I don't turn into a massive fat blimp again like I have done the last few times I tried gaining muscle.

So that's where I am right now on the fitness side of things. Hopefully I'll have another blog post covering my fitness journey in a few weeks once I really start getting into my current program, and maybe another progress update or two on where I am weight-wise - assuming that I haven't quit and binged on cake since writing this post.

No Comments Yet! Be the first to add one by using the form below.

(All fields marked with * are required.)